Call or write for competitive pricing. Add to Cart

GW Instek is launching AFG-2225, its first basic level dual-channel arbitrary function generator, which provides superior features in its class. Both channels are equipped with same characteristics to fit dual-signal applications such as differential or IQ signaling. The outstanding cost-performance value makes the AFG-2225 a practical instrument to accelerate the development process.

The major features for both channels include 10Vpp output amplitude; 25MHz frequency bandwidth with 1uHz resolution; built-in waveforms of Sine, Square, Ramp (Triangle) and Noise. As to the 1%~99% adjustable duty cycle of Square waveform can be used as pulse signal sources. For the arbitrary waveform, user can edit the 66 built-in waveforms or create a whole new one. Moreover, AFG-2225 carries features of AM/FM/PM/FSK/SUM Modulation, Sweep, Burst and Frequency Counter, which can be applied to various communication fields.

In addition to the intuitive and friendly user interface, the 3.5-inch color LCD displays the comprehensive operation information including the true waveform presented at the output. USB Host and Device interfaces are equipped to link the AFG-2225 with other devices, which provide the flexibility of waveform generation for more practical usages. With link to GW Instek GDS-series Digital Storage Oscilloscopes (DSOs), the waveforms of interest can be captured and reconstructed. User can also use the arbitrary waveform PC software to edit the waveform and then send to AFG-2225 directly, or save the waveform into flash drive and then transfer to AFG-2225. 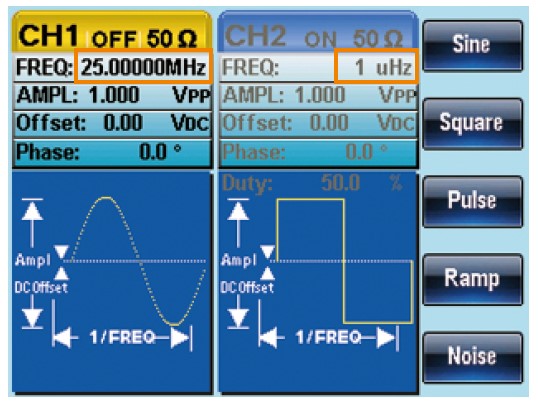 In most two-channel signals applications, such as digital modulation and vehicle electronic simulation signals, the similar or identical waveform capabilities are required for both channel outputs. Unlike other dual-channel AFG in this class, AFG-2225 is fully equipped with equal capabilities on dual outputs. Most of dual-channel arbitrary waveform generators in this basic level cluster offer one major channel and one minor channel, in which the minor channel only provides less functions or inferior performances. This sort of non-full-function dual-channel AFGs can not meet the requirements of reality.

The equivalent function in dual-channel

The two channels can be used in either independent or correlated configuration. AFG-2225 provides three correlated functions which are Couple, Tracking and Phase functions. For Couple function, two signals with a ratio or offset in amplitude or frequency can be generated. One of two signals with adjustable offset frequency is an example which can form the two-tone signals for testing the third order inter-modulation distortion of an amplifier. With Tracking function, two differential signals with equal-frequency, equal-amplitude but inverted phase can be produced. Examples such as PECL, LVPECL and LVDS digital signals or automotive sensors like temperature, speed signals are all able to be simulated by tracking function. The Phase function is designed to create two signals with specified phase offset. When user wants to create two quadrature (sine and cosine) signals, the phase offset is set to be 90 degrees in the Phase function. In conclusion, compared with other arbitrary function generators only equipped with phase function, AFG-2225 provides great convenience to fulfill the various challenges coming from modern electronic industries. 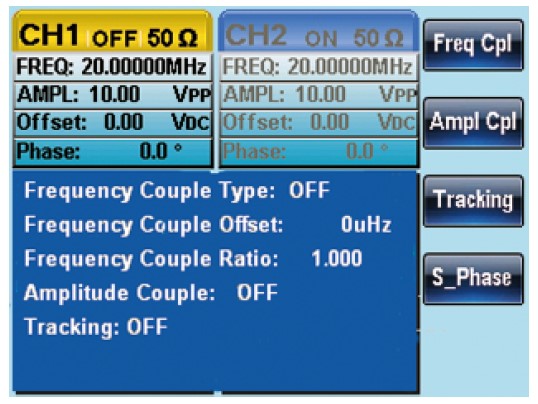 The PC software editing and point-by-point editing particularly provide the way to create the user-defined and post-modification waveform. CSV file loading capability allows AFG-2225 to produce the waveforms with complicated math operation result. For example the MSK (minimum shift keying) signaling in digital communication system needs integral operation. Engineer can use PC math software to process the integral and then send the results in CSV format to AFG-2225. With the link to GW Instek GDS-series Digital Storage Oscilloscopes (DSOs), the waveforms of interest can be captured by DSO and then reconstructed by AFG-2225. User can capture the waveform during the operation and then reconstructed by AFG-2225 for further analysis or diagnosis in the laboratory. Thus, plus the dual-channel feature, numerous derivative applications of capturing signal can be achieved.

Inheriting the advantage of AFG-2000 Series, AFG-2225 provides a 1%~99% variable duty cycle for its Square waveform within 100kHz bandwidth, which is considered practical for the tests such as simulating pulse and transient signals without purchasing extra advanced function generator and pulse generator. 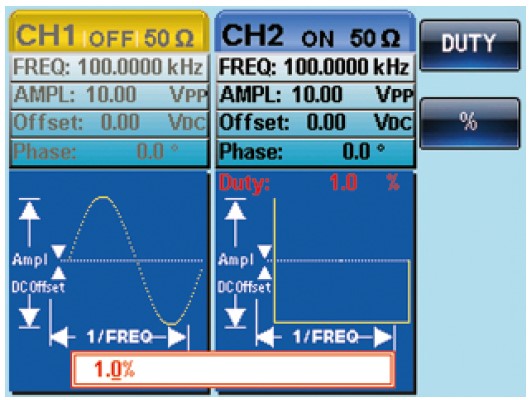 AFG-2225 provides friendly panel operation setting as well as what You See Is What You Get operating way. From editing to output, the process can be manipulated via panel. Besides equipped with highly-flexible editing method, the immediate diagram is capable for users to understand the current waveform status and the output waveform contents under the storage/output setup.

More flexible of flexibility of arbitrary waveform storage and extraction

66 frequently used function waveforms in all fields are built in arbitrary waveform memory for user's selection. They are categorized into four groups, Common, Math, Window and Engineer. The trigonometric derivative functions, Blackman, Chebyshev, Bessel, Gamma, Gauss ... can be selected and developed by further editing. 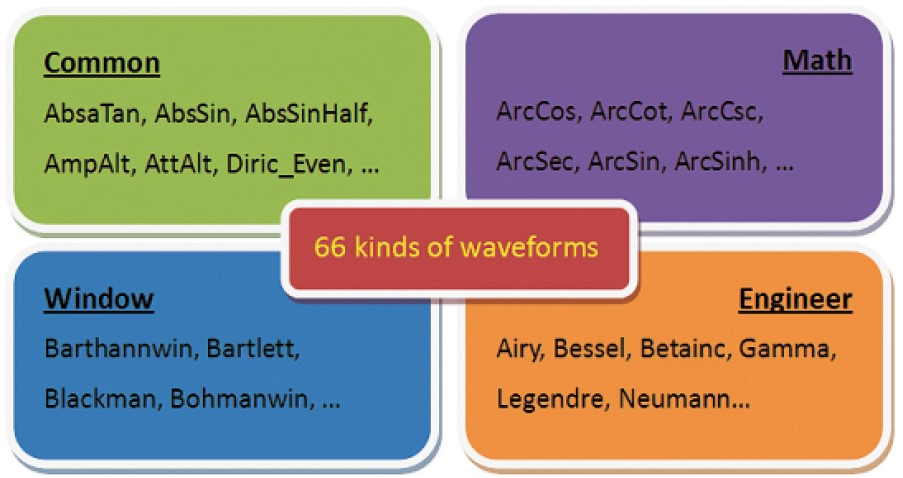 66 kinds of Waveforms in 4 catalog

AFG-2225 owns built-in functions, such as Modulation, Sweep, Burst, and RF Counter. The modulation waveforms contain AM, FM, PM, FSK, SUM, and either an internal signal or an external signal can be selected to perform the modulation. Sweep Function includes two sweep ways, linear and log mode, which can also perform sweep function in internal or external. Burst function supports two modes, Gate and N-Cycle, which can be used to control parameters such as phase angles, duration frequency, and duration time. The built-in Frequency Counter is available to provide the maximum 150MHz frequency range without additional purchase. 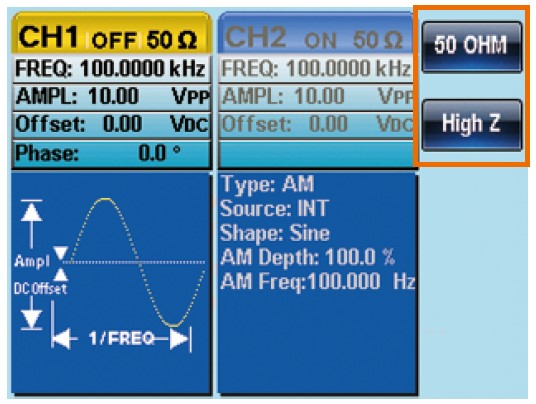 The USB Host/Device Interfaces are located at the rear panel of AFG-2225. The USB Host is mainly used for directly reconstruction of waveforms of GW Instek GDS-Series Oscilloscope, thus, it can be stored and recalled at portable USB Flash Drive; as to USB Device, which is used to connecting with PC, besides controlling through software on PC, USB Device also supports IEEE488.2 Command List for users to process customized functional control.

The specifications apply when the function generator is powered on for at least 30 minutes under +18°C~+28°C.

Do you have a 25MHz Arbitrary Function Generator that needs to be calibrated?